Here at the lab,we are very proud of The 88, we wanted to pass on this press release by their press officer Josh Mills.
Have a look!

LOS ANGELES, CA (November 20, 2006) – “Nobody Cares” from the album OVER AND OVER by the Los Angeles indie buzz band The 88 (www.the88.net), is featured in a year long worldwide Television and Internet advertising campaign to introduce the Microsoft Zune digital media player to consumers.
In its debut week on YouTube, the commercial was the #17 most viewed video in the Music/English category, and #21 most viewed overall music video. It also generated a lot of Internet buzz, ranking as the #49 most discussed music-related video of the week.  By its second week on YouTube, the ad had garnered nearly 33,500 downloads, and comments posing the questions “What’s that song?” and “Who’s that band?” That band is The 88.

This is not the first time music fans have posed those questions.  Nearly every track from the band’s current release Over and Over (EMK/Mootron Records) has been heard by national audiences via licensing to film and television. “Coming Home” was the catchy tune behind retail giant Target’s Spring 2006 national television ad campaign, as well as DIRECTV’s recent commercial for the NFL’s SUNDAY TICKET.  Another track, “All ‘Cause of You”, played over the opening titles of this summer’s hit comedy YOU, ME AND DUPREE and was featured in IRA AND ABBY, an independent film which premiered at this year’s Los Angeles Film Festival.  “How Good It Can Be” will be included in film and soundtrack to the 2007 Drew Barrymore/Eric Bana drama LUCKY YOU.

The 88’s music has been featured in more than 30 television shows running gamut from network to cable, teen drama to procedural, including: GREY’S ANATOMY (ABC), NUMB3RS (CBS), THE OC (FOX), ONE TREE HILL (WB/CW), LAGUNA BEACH (MTV) and WEEDS (Showtime). The hit CBS sitcom HOW I MET YOUR MOTHER devoted an entire episode to The 88 in 2006 entitled “Best Prom Ever”, which included a speaking role for lead singer Keith Slettedahl and the band performing three songs.

Soundtracks the band has appeared on include MUSIC FROM THE OC MIX 1 (Warner Bros.) which has SoundScanned more than 300.000 records, FAILURE TO LAUNCH (Bulletproof), YOU ME AND DUPREE (Lakeshore Records), and WEEDS: MUSIC FROM THE ORIGINAL SERIES, VOL. 2 (Lion’s Gate Records). Securing these licenses is Danny Benair, founder of music marketing company Natural Energy Lab (www.naturalenergylab.com) who represents The 88 for film, television and commercial placement.

In regards to bands latest licensing coup, on November 1, Zune released a sneak-peak 90-second and one-minute version of The 88’s commercial on YouTube, entitled “Zune Picnic.” The commercial starts with the opening line of the song “Open your ears/This is a story” as the visual narrative of people picnicking in a park unfurls silently in the background.  As the song moves from its mellow acoustic vibe and bursts into a jaunty, piano-driven chorus, the picnickers laugh, eat, dance and party, all wirelessly sharing their music between each others’  Zune devices, illustrating the tagline “Welcome To The Social”.
And please welcome back The 88.

ABOUT THE 88
Formed in 2001, The 88 has gained national attention without the benefit of a record deal. Aside from an almost dizzying array of awareness in a variety of major motion pictures, network television shows and advertising campaigns licensing the bands music, The 88 have received critical praise from influential publications such as SPIN Magazine, Billboard, Guitar Player, Paste, Keyboard Rolling Stone.com, the Los Angeles Times, Flaunt and many more. The band has appeared on such influential shows such as The Late, Late Show with Craig Ferguson, DirecTV’s hit program CD USA, The Jimmy Kimmel Show, Last Call with Carson Daly, Current TV, MTV News and Extra. The 88 has toured throughout the United States and Canada this year in support of their latest CD OVER AND OVER on bills with artists such as Matt Costa, The Flaming Lips, Rilo Kiley, The Pogues, The Elected, The Muffs and Ozma. The 88 is: Keith Slettedahl (guitar/vocals), Adam Merrin (piano), Anthony Zimmitti (drums) and Todd O’Keefe (bass).

The Quick And Jules Bates
Our myspace friend artrouble posted this wonderful piece on his blog that we wanted to share with you. We hope you enjoy it. Jules is sadly missed. A wonderful and talented photographer who passed away in the 80’s. 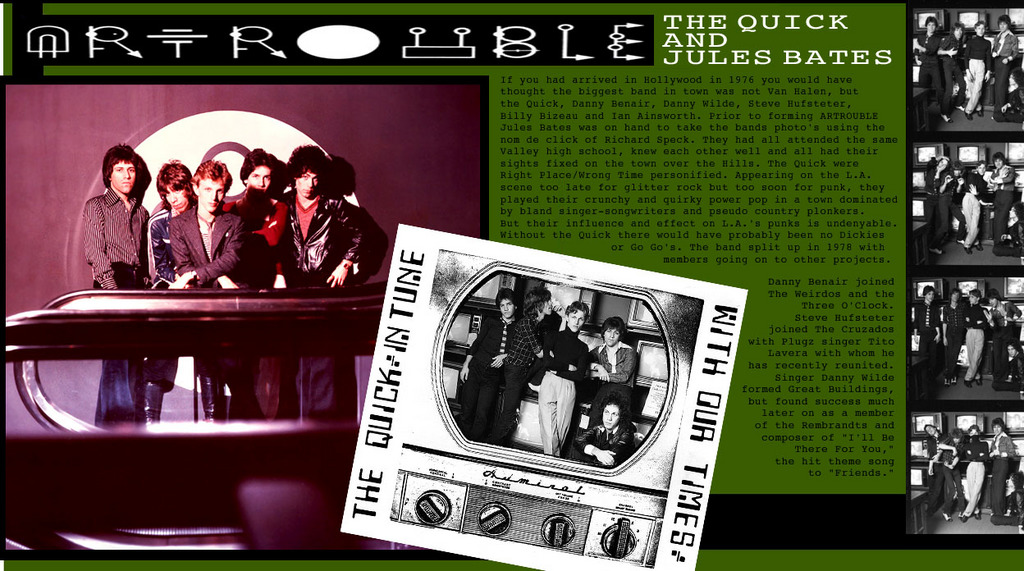 Youtube of late has been a treasure trove of fun. Uncovering rare videos. So my Easter gifts, here are a…

Back in 2008 I started a record club. The pandemic moved from Freakbeat Records to a weekly online experience. With…