Rock and roll has guaranteed one thing, no scene is ever created without a record collection. I was in a band called the Three O’clock, and there would have been no band, no scene, nothing without vinyl. Prior to joining there was an amazing band called Salvation Army led by Ricky Start also known as Michael Quercio; this was their name until amazingly the actual Sally Army gave us two weeks to change our name. The first time I heard them I thought it was Pete Shelley fronting a psych band, punk speed with psych overtones – absolutely amazing! Shortly afterwards, my friend Lisa Fancher signed them, and I watched as they recorded their album. Little did I know that pretty soon I would be in the band and part of a wonderful moment in la music history. Fast forward a few months and this shiny little combo is playing LA clubs to mods, psych fans and others from 12 to 30. The record collections paid off – all of a sudden the Dream Syndicate, the Bangs, Rain Parade and the Long Ryders were playing clubs and making some noise, good noise.

Denny’s on Sunset Boulevard is a horrible restaurant where every band has eaten once and where L.A. Weekly was interviewing the band for a feature, when Michael Quercio, sitting in a round booth next to the window on the far right, blurted out a phrase, “the Paisley Underground” – little did we know that we would live under that banner for the entirety of our six year career. But at the time, back in 1982, there was a scene and that is how Michael saw it through the bangs covering his 17-year-old eyes. Yep, it was a scene; our guitarist Louis was dating Sue from the Bangles, formerly the Bangs, she came from a scene in Brentwood where Rain Parade’s Roback Brothers lived. People played on each other’s records, there was warmth and there were no record deals, at least major, and all was beautiful. There were some great shows with all or some of the bands on the same bill and trips up north opened another world; we travelled with the Dream Syndicate, and all was fine, it wasn’t L.A. in ’76 or ’66 but it had its magic. You could play in Orange County, 1 hour south of L.A., and 800 kids would be lined up for this new/old sound; there were local tv shows, it was a great time, it was our moment. Police breaking up kids blocking radio stations, yes, it was our moment, a long moment.

At the time we worried what the other bands were doing. I remember word got out that the Three O’clock were going to cover ‘Open my Eyes’ by the Nazz, well the Bangles had just worked it up, so it was out of bounds. We settled it by writing a song called ‘Her Head’s Revolving‘, and tipping our hat to the Nazz, it was easier. Record collecting was in a way like sampling in music today, except in 1982 you sampled by creating a song using the influence of something you loved. Same with drumming, should I be Ringo Starr, Kenny Jones, Bobby Graham? It was samples before samples, and that’s what made it work. But in the end the machine got to everyone, Columbia, A&M, i.r.s., Island and the rest bought in and the compromise started, but go back pull out some of those records, and you will either be really turned off or get it, I get it, it does not matter if others do or don’t, I was there and look back fondly. 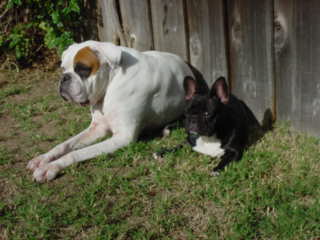 Chesterfield and Baby
These are my kids relaxing at Rancho Benair

Staying At Home Most of us are living through this grind. Creating our own patterns. Attempt to work. Meals in…