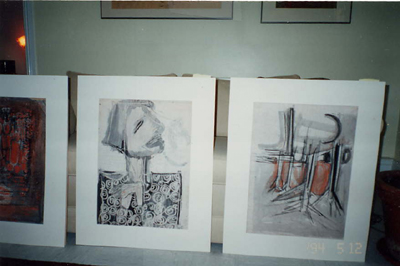 In the mid 90’s I went to Beatlefest, nothing like walking the halls, and seeing a man in his mid 30’s in a Sgt. Pepper outfit.

I worked for Polygram Publishing at the time, and ran into Pauline Sutcliffe, the sister of late ex Beatle Stuart who passed away in 1962. Polygram Pictures, made the movie Backbeat, about his life, and I had always been intrigued about a man who was a very talented painter, but left a band before they became famous.

For a long time I had seen his artwork in books, and liked it, never think it was possible to own a piece.

As I talked further to Pauline, I saw that she was selling limited edition posters of some of his work, and happened to ask if she ever sold any since I had noticed some on the market. She did, and had three pieces for sale, back at her hotel. I figured I must see them.

Two of the three were cool, but seemed more like sketches a artist does in art school. So I went for painting number three, which was drawn in Liverpool in 1960.

I have enclosed a photo it is the one on the right, no the one in the middle was not for sale, I really like that. The book companyGenesis, did a wonderful book of his art, which is hard to find, but worth the time, and even has a re-creation of a sketch book of his.

He had the talent, great image, cool girlfriend, and cool friends in The Beatles, sadly he died very young, but his art shows what could have been the makings of quite a career.

Youtube of late has been a treasure trove of fun. Uncovering rare videos. So my Easter gifts, here are a…

Back in 2008 I started a record club. The pandemic moved from Freakbeat Records to a weekly online experience. With…