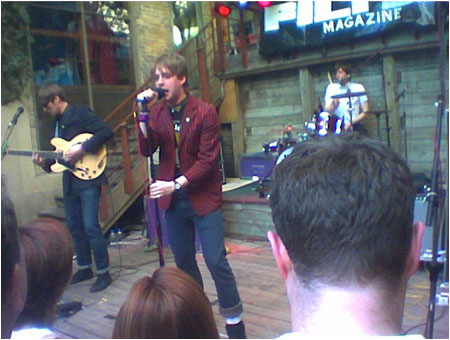 With the help of friends (Brian, Andrea, and Stephanie) I made my way back to South By Southwest for the first time in about 6 years, and it has changed.

It used to be where the days were free, nothing much going on, and you would have time to meet with people, shop, etc. Well everyone now has a party, Filter, New Times, Spin, Your Mama etc. The upside you can check out many bands during the day, and not have to see them at night, the down side, it’s just crazy! You are lucky if you run into people.

I saw lots of music, my fave gigs were the Kaiser Chiefs Filter party, which was the best I have ever seen them, here is a photo from that gig. I talked to Ricky, the lead singer, and he told me, it is his favorite gig,they have ever played. Can’t explain, it but it was a blast.

Band that will take the cloud from over your head and blow it away, is The Magic Numbers, they are on Heavenly and have a single that is already very expensive, saw them at a party, made me run to see them that night, and I then had to see the only LA gig, 2 pairs of brothers and sisters make up this harmony perfect combo, great songs, they look very rock and roll (not) and I love them!

5 months of the year have gone by. I do not know anyone who could have expected where we would…