Spin has given me a couple of mentions this month, first there is a nice piece on The 88.

You’d think adoration from the tanned denizens of Laguna Beach and The OC would guarantee fame for musicians on the shows’ soundtracks. Alas, not everyone is Ben Gibbard. But if you’re in a band, don’t give up: Score the right shows and you could be riding high in an apartment whose rent you paid on time.

Unless you live in L.A.’s Silverlake neighborhood, you probably don’t know the 88. But chances are you’ve heard their Kinksy tunes, like “Coming Home” or “Hide Another Mistake,” blasting in the background of Grey’s Anatomy, The OC, Weeds, Laguna Beach, How I Met Your Mother, and at least 20 other shows. “It’s tough to get on the radio,” says keyboardist Adam Merrin. “But TV licensing is an incredible way of getting the music out to people who normally wouldn’t hear it.”

Of course, the 88’s album sales haven’t exactly skyrocketed since entering Seth Cohen’s iPod, and they don’t have distribution secured for their next record. But having no major-label affiliation has proven both a bane and a boon. “If you’re on an indie label, you can’t guarantee your CDs at Best Buy,” says music marketer Danny Benair, who represents the 88 for film and TV spots. “That’s a vital opportunity missed. It’s a big step going from a band with lots of placements to Franz Ferdinand.”

Yet this lack of corporate bureaucracy makes the 88 attractive to television. “We’re easy to get a hold of,” says Merrin. “Danny calls me and the deal goes through the same day.”

By making anywhere from $1,000 to $25,000 per song, the 88 financed their third album entirely from licensing. “We hired a string section. We bought a van. We’re able to pay rent. We got a PlayStation to pass the time,” says Merrin. Thus, the band is poised to become a rarity in the biz – self sufficient and comfortably free from the major-label machine.

“We want a million people to hear us,” says Merrin. “That’s gonna happen even if no major picks us up. We’ll just put out records ourselves.”

Robbie Rist Listed The Quick in his ten most over looked Power Pop bands…Thanks RR! 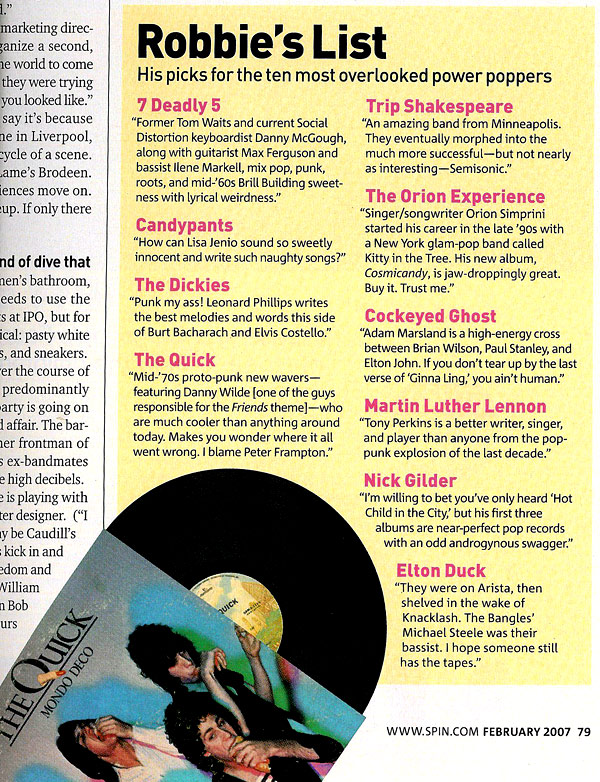 Well, not really but the building we are in can be seen on the right. Sunset Blvd in 1927! if you see the red car turning, the three windows on Sunset is where are office is.

No wonder we have such terrible electricity in the building, it has not been updated since 1927!

I have enjoyed Twitter for many reasons. Maybe my love of Baseball and it’s writers. Film, music the ha-ha’s and…

As Los Angeles Dodgers President Andrew Friedman said. The best team does not win but the hottest team does. There…