2.) What was your first record purchased or owned?

3.) What record or tape have you had to replace to due to listening to it so much (if any)?

None, I love the snap,crackle and pop of vinyl, baby!!!

5.) Your ‘Desert Island’ five “must have” album picks are:

a. *Revolver Beatles for McCartney’s solo in Taxman
b. *Forever Changes Love
c. *Between The Buttons The Rolling Stones
d. *Odyssey and Oracle The Zombies
e. *We Are The Village Green Preservation Society The Kinks
f. Ask me tomorrow, and I will pick 5 others!!

7.) Last concert that left you blown away and raving.

8.) What fad would you most want to see make a comeback?

Great dances like The Freddy,The Charlston, and the Locomtion. And I want to start two Dancefads,The Headache, and The Charlton Heston, they will be massive in the Midwest.

9.) Favorite “Behind the Music” episode?

10.) I would be most likely to be found guilty of:
a. Having a mohawk
b. Having feathered hair
c. Singing into a hairbrush while thinking no one is watching.
d. Spotted in Heavy Metal Parking Lot
e. Wearing acid washed jeans tucked into cowboy boots.
f. All of the above
g. C and air guitar too!

11.) Favorite use of a song in a commercial?

12.) This question will be entered into a short “Mad-Lib”, please answer
the following:

13.) Who would be your ideal person to have a Reality TV series based on?

Sadaam and Osama on Survivor

Tuna Melt, but Ihave not had one in years!

Dressing like a member of the Bay City Rollers. 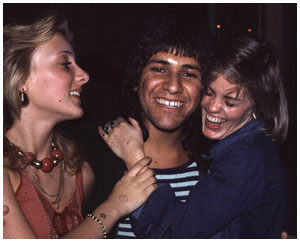 16.) Favorite pop song that has been covered in Muzak format?

One Track Mind – The Knickerbockers

Oh…they both suck…15 minutes is way up.

18.) Musician or group you’d love to see on the Simpsons?

to stop George Bush from his world tour of war!

Goodbye Peter Green In reality, you left a long time ago. When I first heard The Supernatural on John Mayall's…